By Salman Chaudhry on June 23, 2014@worklifedubai 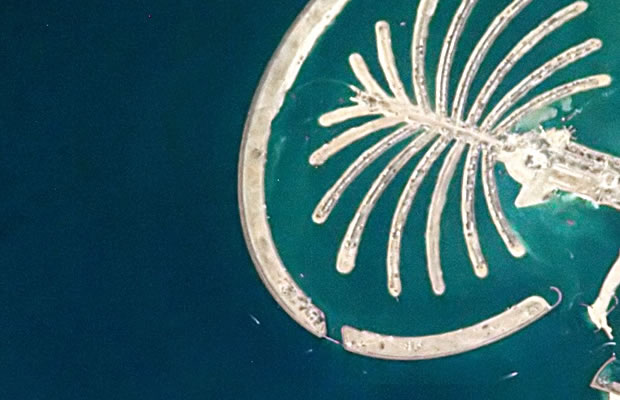 The Palm Islands in Dubai are one of the most iconic attractions in the Emirate. Featuring the Dubai Palm Jumeirah and Palm Jebel Ali and including the Madinat Jumeirah Hotel and Palm Atlantis, it is well worth the visit even if you just want to see the hotels. The final building work will feature over 100 hotels.  This magnificent construction feat alone and the reclamation of land from the sea is a feat that has been achieved in a very short timeframe.

The Palm Jumeirah was started in 2001 with reclamation work continuing for over 5 years.

The work was completed by the Nakheel company (owned by the Government of the UAE) who has been in charge of many of the major building works of Malls and Hotels across the region.

It features a main road featuring the hotels with various leaves branching off into the residential areas.

The building work involved dredging a 10 and half metre sand bed out of the land under the sea, and 94 Million cubic metres of material including rocks and sand.  The cost for reclamation topped 12 billion dollars.

The area features a number of hotels and resident areas including the Kempinski, Royal Club, The Palm Atlantis and Jumeirah Zabeel. The beach apartments are the most popular with many celebrities and personalities having bought apartments here.

It has been reported the Palm is slowly sinking from a geological survey as reported in the New York Times and the Daily Mail.

The Nakheel Corporation refutes the claims and says the ground is not sinking after reporting its own findings.

With the hype surrounding the launch of the project, the uptake of properties was high with most of the apartments and residencies now occupied.

The second Palm project from the Nakheel Group began in 2002 with a greater focus on size and reported to be twice of the size of Palm Jumeirah.

Featuring six marinas for yacht and boat lovers and a water theme park and an ambitious gigantic poem built from the spaces around the leaves of the Palm. This was commissioned by the Prime Minister and Monarch Sheikh Maktoum.

Unfortunately, due to the Financial Crisis of 2010 construction work slowed down and had grown to a halt by 2013.

The Chairman of the Nakheel Group Mr Ali Lootah, Mr Lootah said the project would be completed but in the “long term”.

The Nakheel group has been highly ambitious in its recent growth of Dubai and has been concentrating on other projects such as the Jumeirah Village and Jumeirah Heights.

Is it worth visiting?

For the sheer bravado of the Nakheel Group to conjure up such a project is a fantasy come true in itself.

Having such an iconic place such as the Palm adds to tourism and is worth seeing if you are first time visitor to Dubai.

Whilst the Palm Jebel Ali remains unfinished, the Palm Jumeirah has the bonus of top quality Hotels.

The Palm Atlantis is the most popular attraction with excellent views of the sea and wonderful dining areas.

For the everyday visitor it probably isn’t a regular attraction of Dubai, but if you want to have a drive around and admire the engineering feats of such an ambitious project and see the beautiful villas its a good way to pass the time.

We would certainly recommend staying in one of the Hotels, notably the Kempinski or the Palm Atlantis. The Sofitel also boasts excellent service.

The Dubai Palm Jumeirah has a monorail link to the mainland area and driving takes around 20 minutes from the furthest point on the mainland.

Thinking of Staying here? Try the links below!

Book a night at the World Famous Palm Atlantis!

See what Hotels are Available in Dubai?

Salman Chaudhry is a leading online marketer and web expert with a keen interest in Dubai. WorkLifeDubai.com is a website providing helpful news and reviews, hints and tips for people wanting to live and work in Dubai.
Related Itemsdubai holidaysdubai palmdubai palm hotelsNews
← Previous Story Why are escorts acceptable in Dubai?
Next Story → Dubai stock market dropping rapidly