By Salman Chaudhry on July 29, 2014@worklifedubai 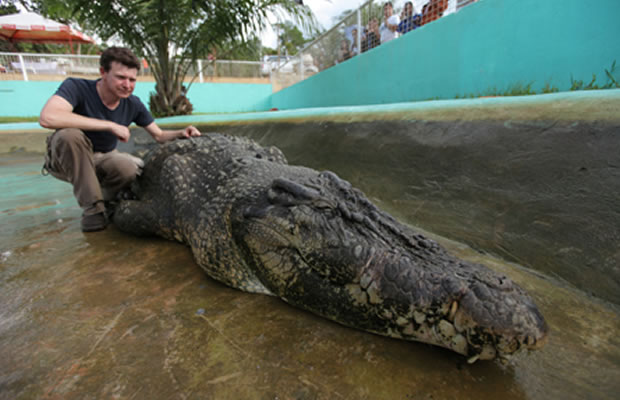 If you want excess, Dubai is the place to come. Have you ever seen a monster crocodile at Dubai Mall? Well you have now.

With its need to host ever more crazy stuff, last months addition was no exception.  In  June 2014, Dubai Mall hosted a monster crocodile from Australia just ready to eat whatever came in its way.

The beast weighed 750kg and 5 Metres long, and came from Queensland in Australia to spend time with shoppers eager to see a true reptilian monster of epic proportions.   The crocodile is so powerful a custom build enclosure with 50 millimetres strength had to be created just for “King Croc”.

He eats 1 chicken a day which is actually down from 20-30 chickens if King Croc were a wild animal. Being bred in captivity, the crocodile has reduced his intake by training from keepers.

The Crocodile was showcased at the Dubai Aqarium and Underwater Zoo in June and mall goers were quite excited to meet him.

The crocodile scared me at first but I’ve never seen anything like this before – Ali Zaman, 26

Dubai Aqarium hosts over 300 species of underwater sealife and hopes to attract new customers to its educational course on Crocodiles as supported by the Ministry of Education.

What do you think about King Croc?

Salman Chaudhry is a leading online marketer and web expert with a keen interest in Dubai. WorkLifeDubai.com is a website providing helpful news and reviews, hints and tips for people wanting to live and work in Dubai.
Related Itemsdubai mall animalsdubai mall crocodilemonster crocodile at dubai mallNews
← Previous Story Alternative Things to do in Dubai
Next Story → Top 6 Hotels in Dubai Marina