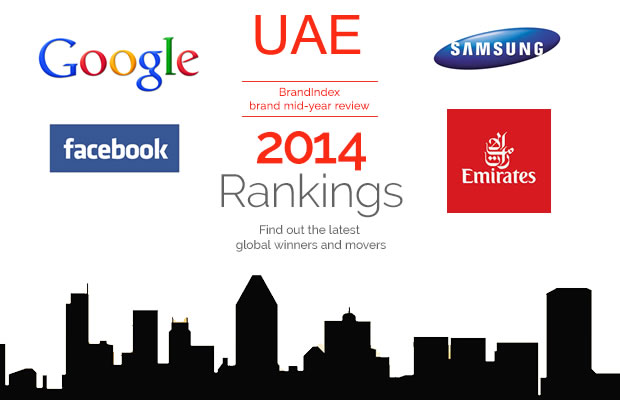 A recent YouGov Buzz Ranking metric for the first quarter of 2014 reveals the South Korean giant has beaten many of the top brands used across the Emirate with its market leading innovative products with a customer focus on usage.  Improving on Apple’s record in the region, Samsung continues to churn out mobile phones, electronics and consumer goods with desirability in mind.  The Samsung Galaxy S5 and Note range of products has taken the UAE by storm and are highly desired items for young professionals and expats alike.

Google comes in a close second with its search engine, mobile apps, products as well as their recent foray into laptops and small electronics. The brand has grown exponentially in the region with the improved technology infrastructure being invested into technology by Dubai Government Authority.

Emirates maintains third position – with its vast advertising campaigns and promises of adventures as well as devotion to customer service the brand has kept its image strong within the UAE. Their global position also retains a glossy image, despite not being a part of the StarAlliance membership programme for airlines and the recent coverage in the world cup has further increased ticket sales.

Facebook comes in at number 6, a new entry this year as with the UAE having the second highest penetration in Arab countries – 49% more users logged onto facebook in 2013-2014 – an astounding result for the website which was struggling to get a foothold in the Emirate. With the increase in expats from around the world numbers will continue to rise.

Dubai Mall also makes a  brand new entry to number 10 with its boast of being the worlds largest shopping mall based on total area excellent customer service and diverse range of shops resulting in over 75 Million customers at the end of 2013, a truly staggering number!

*YouGov BrandIndex’s Buzz score is a survey asking a cross section of the general population, “If you’ve heard anything about the brand in the last two weeks, through advertising, news or word of mouth, was it positive or negative?”

Salman Chaudhry is a leading online marketer and web expert with a keen interest in Dubai. WorkLifeDubai.com is a website providing helpful news and reviews, hints and tips for people wanting to live and work in Dubai.
Related Itemsdubai news storiesNewssamsung beats google uaesamsung crowned top brand uae
← Previous Story What do people really think of Dubai?
Next Story → Top 10 nightlife in Dubai